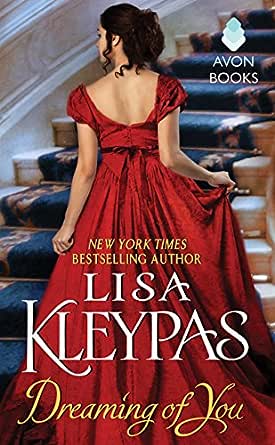 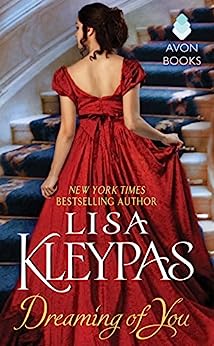 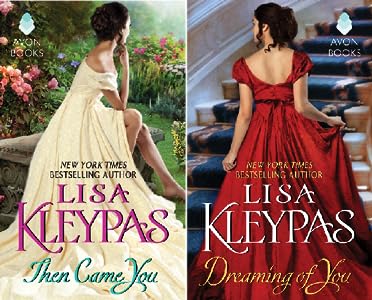 Lisa Kleypas is the RITA Award-winning author of twenty-one novels. Her books have been published in fourteen languages and are bestsellers all over the world. She lives in Washington State with her husband and two children. --此文字指其他 kindle_edition 版本。

"A Real Joy . . . Hard To Put Down"-- Kathleen E. Woodiwiss"Wonderfully Refreshing . . . I Enjoyed It From Beggining To End." -- Johanna Lindsey"Lisa Kleypas Is More Than Just A Fine Writer Of Rich And Passionate Historical Romances, She's A Genuine Phenomenon.--" Heart to Heart --此文字指其他 kindle_edition 版本。

Angie Mike
5.0 颗星，最多 5 颗星 DREAMING OF YOU - An Amazing Historical Romance
2017年6月9日 - 已在美国亚马逊上发表
已确认购买
DREAMING OF YOU is such a beautiful, timeless romance and one of my absolute all-time favorites! I originally read this novel nearly a decade ago, and its one of the few I like to re-read every couple of years. I loved the first book in this series "Then Came You" and honestly "Dreaming of You" was even better. I think what makes this story so different and compelling is our hero, Derek Craven, who is no lord of the realm but a force all his own and a man to be reckoned with. He grew up as a poor Cockney child, and ends up making a name for himself while building a gambling empire.

Sara Fielding on the other hand is a sweet country girl and a writer. While following up on some details for her current project she comes to the aid of Derek one evening, which is how they meet. As people they are complete opposites - she sweet and simple, he hard and cunning. Sara helps heal Derek's tortured soul, get over his painful past, love and learn to be loved. This is one of those rare books that actually had be bawling and is a very poignant story of love and redemption. It's truly just an unforgettable tale that never fails to engage my emotions and I cannot recommend it enough =)

Below is a list of all the stories connected with the "Gamblers" series and their reading order, for those who don't already know:

Book 1 - THEN CAME YOU (Lily Lawson & Alex Raiford aka The Earl of Wolverton)
Book 2 - DREAMING OF YOU (Sara Fielding & Derek Craven)
Book 3 - PROMISES (a novella originally released in the "THREE WEDDINGS AND A KISS" anthology)
Book 4 - AGAINST THE ODDS (a novella originally released in the "WHERE'S MY HERO?" anthology) Sara & Derek's daughter's story

MG
4.0 颗星，最多 5 颗星 Cockney Craven
2019年8月14日 - 已在美国亚马逊上发表
已确认购买
Derek Craven has everything a man could want: women falling at his feet, riches beyond measure, the goods on every man in London, and no attachments. But underneath the facade, he is deeply lonely. His best friend is now married to an earl as she should (since Derek felt he was not good enough for her and pushed her away to avoid falling in love with someone he could never have), and while he enjoys being Uncle Derek, he still has an emptiness that he doesn't feel he can ever escape. He was abandoned in a drainpipe when he was born, raised by prostitutes, worked nearly to death as a chimney boy, and did anything and everything to scrape his way up from the Rookery to where he is today. No one can ever love a man like him, and he has no love to give to anyone anyway.

Sarah Fielding is a writer -- her most successful story was about a prostitute named Mathilda, and she is working on a new story, but she needs to be in the thick of the action in London, not in her small and safe town in the country. As she settles in the background behind a gaming hell to observe and take notes, she hears a loud scuffle and scream of pain. Though she knows she shouldn't get involved, she cannot ignore someone in need, so she rushes towards the commotion to discover a man being attacked by two men holding him down and cutting a deep gash in his face. She scares them off but is left to wonder if she was too late as the very still man laying on the ground's face is covered in blood. When she discovers he is alive, she assists him back to Craven's, the gaming hell she was lurking behind, and she soon learns that he is none of than Derek Craven! A stroke of luck as she was hoping to gain some insight from the sources themselves. Derek has no time for a spinster woman wandering his club, but he feels some obligation as she did rescue him, so he allows her to interview his staff, but he wants her kept away from him. There is something about her that makes him feel things he does not want to feel. Not only does he have no use for love, he knows that someone like Sarah could never give her heart to man who has done the unthinkable things he has to make his way in life. And a lady as plain and unworldly as Sarah could never attract a man like Derek... right?

What I liked:
--- Definitely an opposites attract story with some interesting twists along the way
--- Derek was very flawed as an H, and Sarah was a straight-laced h, but they addressed their issues and didn't gloss over anything, so it felt more genuine
---Steamy goodness!
--- A few plot turns and some danger added in for good measure

What I didn't like as much:
--- The villain situation was a little over-the-top (her revenge plot at the house party was way out there - no way the accomplice would have just gone along with it)
--- Some of the aspects of the story felt a little rushed

Overall, a very enjoyable opposites attract romance with some steamy goodness and interesting plot twists to keep the reader hooked until the last page.

Blondebell
5.0 颗星，最多 5 颗星 Long suffering surrender to fulfillment
2019年7月10日 - 已在美国亚马逊上发表
已确认购买
If you love dark reluctant anti-heros then you will love Derek Craven! He is a bad man who has done unspeakable things for survival and to better his circumstances. He thinks he is unworthy of love and contentment. He plunders through any and all vices searching for that illusive something... And one day a little slip of happiness and innocence saves him from a cruel punishment for his vice. She invades his life and he cannot keep himself removed from the emotions and contentment she evokes from his heart. He true to the very last to hold himself apart until circumstances rip forth all of his devotion and adoration revealing a truly good man worth loving. And Sara is all that is good a worthy of his devotion. I did had trouble when she returned to her fiance after meeting Derek but everything worked out in the end. I loved the glimpse into thier HEA and how they acclimate to family life. Loved it all.
阅读更多
2 个人发现此评论有用

Deanna PinkLady
4.0 颗星，最多 5 颗星 My first Kleypas book and I loved it
2020年6月17日 - 已在美国亚马逊上发表
已确认购买
I have never read a Lisa Kleypas book and shame on me for waiting so long. I do know that lots of my friends love her stories and as I do like historicals, I decided to jump on the back wagon.

Derek Craven and his tortured soul......the “I don’t deserve love because of my background” and his reputation as a rogue is known far and wide around London. Sara Fielding, the sweet, country maiden, savvy author, who might I add is also a virgin, is a strong woman of her convictions but wants to know if she needs more than what her life is suppose to be. The scoundrel and the virgin meet and it’s a constant push and pull. It’s not easy for these two to find their HEA but their journey is filled with passion, wants and desires and a great banter fit for the time period.

There was also a great groups of secondary characters in this story. I was transported back in time to 1800’s London, I could imagine the social club owned by Derek and the country side where Sara grew up. I enjoyed my time with Derek and Sara and that epilogue, it was perfect!! I definitely look forward to reading more by Lisa Kleypas.
阅读更多
加入亚马逊Prime，从此免运费
亚马逊Prime会员可享海外购美/英/日/德跨境免邮，全年无限次！更有免费无限次阅读电子书服务
> 立即加入
了解我们
合作信息
帮助中心和购物指南