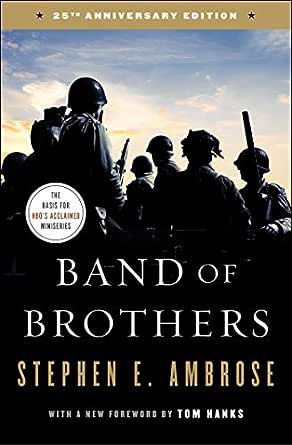 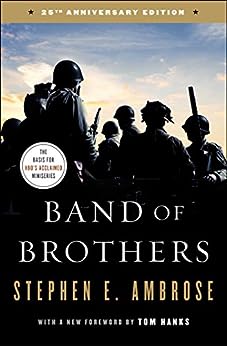 Clem
5.0 颗星，最多 5 颗星 War at its best (i.e. worst)
2018年7月15日 - 已在美国亚马逊上发表
已确认购买
When it comes to books written about war, I tend to enjoy the high-level ones that give overviews of the big picture and don’t go into too much detail. Usually, the more detail, the more I get lost. So when I read a book about the intricacies of a battle along with names of soldiers, names of towns, names of divisions, etc. I tend to get lost and overwhelmed.

This book seemed to be about 50/50, as it focuses not on the overall big picture of World War II, yet a select group of Airborne infantry – The Easy Company of the 101st Airborne division. Back in the thick of the war around 1942, someone had a bizarre idea: Why not have a host of soldiers jump out of an airplane with a parachute right into the thick of battle? This sort of idea is only for the toughest of the tough, and when the soldiers begin their training, they don’t actually see combat until D-Day. There’s a lot of preparation for such a tactic.

Once we’re in battle with Easy Company (in addition to D-Day, the other major skirmishes they jump into are Market Garden and the Battle of the Bulge), the author manages to keep the story more focused on the human element of battle as opposed to strategies and objectives. This is mostly a good thing. It’s good because it makes a much more compelling story. It’s not good because a ‘compelling story’ doesn’t mean it’s a happy story. This is a war. In fact, I’ve never read a book that describes the horrors of the battlefield quite like this one. Yes, there’s the horror of bullets flying over your head at all times and seeing your best friends killed in front of your eyes, but there’s also the horror of lack of food, dysentery, weeks of living in filth, and foot ware so inadequate that your forced to endure soaking wet feet in subzero snow. It’s impossible for men to live through this without changes to the fragile psyche.

Strangely, I never felt connected to anyone in particular in this book. The cast of characters in this drama is huge, and it was incredibly hard for me to keep track of who was who. Some names stayed consistent throughout the book, but in a war, sadly, a lot of men get killed, so it seemed that every pause in the action meant that there were several fresh faces and names for the reader to assimilate. Again though, this wasn’t a detriment. Suffering is suffering, no matter whose name is attached to it.

Easy Company also plays a pivotal role in the eventual capitulation of Berlin in 1945. The European war is over, and the soldiers go way off the deep end with their alcohol intake and debauchery. Things get very uncomfortable in some circumstances. Too much whisky and guns don’t mix well. As I mentioned, though, such inhumane conditions cause one’s spirit to become tragically altered. Why should soldiers care about kicking a German family out of their house so they can live in relative comfort? Wherever this family ends up won’t be nearly as bad what they endured for months in a slimy fox hole. And it WAS their side that started the bleeding war. So….

I came away with tremendous respect for any solider that has ever been in combat. True, that respect has always been there for me, but when a tale is told with such gripping realism, it makes you appreciate the sacrifice all the more. Kudos, also, to Stephen Ambrose for telling the tale so well.

Mark
5.0 颗星，最多 5 颗星 Outstanding book, even if you saw the miniseries, read this book
2019年3月20日 - 已在美国亚马逊上发表
已确认购买
This book really takes you there, in a personal way. Yet, unlike so many of the "first person interview" type books that became popular after this was published, you don't lose out on the big picture. The strategy isn't lost even though we're seeing it from the squad and soldier level of the war. Ambrose deserves great credit for taking such a mountain of research and distilling it down to a very readable form. The book is as good a page-turner as any fictional novel, even though these are real people's lives. I saw the miniseries years ago, and was reluctant to buy the book thinking it wouldn't be worth it. But the book has so much more detail, and is far more personal. My father served in combat in WW2, and I have read hundreds of books about the war over the past 40 years. Band of Brothers rates among the best, and I strongly recommend reading this book.
阅读更多
11 个人发现此评论有用

r.doolittle
5.0 颗星，最多 5 颗星 RMD - Band of Brothers
2018年4月12日 - 已在美国亚马逊上发表
已确认购买
Both my parents were involved in World War II, (mother, was an English WAC, and father American, Air Force). My father received a Bronze Star for keeping the various Air Bases electricity working. So I can very much appreciated what this book tells us. There were many such relationships between soldiers during both European war (ETO) and the Pacific war (PTO). But there are also thoughts special group of soldiers that achieve such an effective relationship between men, soldier to soldier, that nothing but death will tear them apart. Easy Company was that sort of soldiers. If you have any interest in WWII.......will these men were something special. Please read this book. It's true.
阅读更多
6 个人发现此评论有用

James F.
5.0 颗星，最多 5 颗星 Thank you all armed forces for your service!
2019年8月1日 - 已在美国亚马逊上发表
已确认购买
I took a college History class and needed to read a book and write a essay about what I liked about it. My professor suggested this book and I recognized it because of the hit TV show. I decided to read it and I think it's the fastest I've ever read a book. It's truly a great book. What I like most is the shifting from stories to the backstory and the interview side of things, it adds a whole different layer and really helps you get a feel of what these men went thru. It's a book I think all people should read when 17 or 18 whether you want to join the military or not. It's truly given me a whole new respect towards the branches of our armed forces.