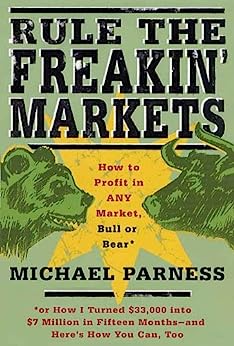 Rule the Freakin' Markets: How to Profit in Any Market, Bull or Bear (English Edition) Kindle电子书

In 1998, Michael Parness was a struggling playwright and screenwriter who was leaving the stability of his successful sports memorabilia business to write full-time. Following the advice of a stockbroker, he invested his nest egg of $150,000. But the October 1998 crash gutted his portfolio by 80% and his stocks failed to recover. With virtually no income and no financial cushion, he found himself in a tiny low-rent apartment with time to think about what had happened, and, eventually, enact financial revenge. In January 1999, he opened an online brokerage account and set out to get his money back. And in fifteen months, Michael Parness turned $33,000 into seven million dollars, started the online trading website
"Trend Fund" where thousands of traders Rule the Freakin' Markets with him, and had his life story optioned by a major Hollywood producer!

In Rule the Freakin' Markets, Michael Parness uses visual aids combined with practice exercises to show online traders and investors how to:
* Practice responsible trading techniques that maximize reward and limit risk
* Avoid the "7 deadly sins plus fear" that block success in the market
* Protect investments no matter what the market does
* Understand how market psychology drives daily and cyclical market moves
* Avoid the pitfalls of trading in cyberspace
* Recover and learn from significant losses
* Strategize and anticipate, rather than overreact or freeze when change occurs
* And finally, live full and satisfying lives as traders

With its lively tone and refreshing approach to trading and investing, Rule the Freakin' Markets is an essential guide for online traders and investors alike.

Michael Parness is the owner of www.TrendFund.com. He has been featured in The Wall Street Journal, Forbes, Money magazine, and The New York Post, Bloomberg Radio, and makes weekly appearances on CNNfn's The New Show. He lives in New York City.
--此文字指其他 kindle_edition 版本。

Clarence Oliver
3.0 颗星，最多 5 颗星 Gurus Don't Work, Even the Good Ones
2010年7月18日 - 已在美国亚马逊上发表
已确认购买
A lot of people who give this book negative reviews claim that the author probably didn't do it. But let's for argument sake say he did succeed in doing it, that he made 4 to seven million dollars in two years or so. That still doesn't mean his system will work for you or anyone else. Unless it is completely automated, the system really depends on the individual trader. I'm not going to write my strategy word for word in a book and try to sell it, even though I could tell all my trades, but it's my system, and I honestly don't want someone else to have it. I've shared it with my mother, a close friend I've had since high school and into college and they both had success but nothing like my success, why, because, it's not their system, and they can't get the flow of it.

So even if what Michael Parness says is true, it doesn't really matter, the market conditions were different, he tailored the system for him, and if you acted just like him, you still wouldn't have the major success he has most likely, because you'd be just copying him, and you can't be as good as the original.

That's the problem with guru systems, and people get angry when they don't work out and call it a fraud. I don't think he's trying to defraud people, I believe Michael Parness is really trying to help people make money and help himself make more of it--he was always a salesman, but that doesn't change the fact that there's nothing wrong with the system, except that the system isn't yours.
阅读更多
7 个人发现此评论有用

iconoclast
1.0 颗星，最多 5 颗星 An HONEST, objective review: THIS BOOK IS JUNK!
2007年4月1日 - 已在美国亚马逊上发表
已确认购买
I bought this book for the wrong reasons: I saw so much controversy between the reviews that I was tempted to take a peek myself; and honestly, it was selling for only $2.00! I figured, how bad could it be? Even if there is one small nugget in this book, one insight that could help me with a SINGLE trade, the $2.00 would be worth it. Well, here is the low-down:

1. If you are someone who barely knows the difference between stocks and bonds, then maybe (just maybe) you could learn something. If you are a 65-year old retired homemaker and are curious what this "darned stock stuff" is all about, this book is for you. In sum, folks, this is TRADING 1.0001A. And guess what? In a few short years you could actually graduate to TRADING 101 !!!!!

2. If you are a serious stock or options trader (like myself), there is NOTHING of any VALUE in this book at all! There is not a ***SINGLE*** stock setup mentioned that would help you with ANY trade.

3. Sure, there are a lot of words in this book. Lot of irrelevant junk. For example, here is a sample of subsections in Chapter 13 (read and weep!)

Wow! Can you believe this? At this rate, in his next book, maybe Parness will include a chapter on changing diapers!!!

C. BLUESTEIN
5.0 颗星，最多 5 颗星 Where have you been Michael?
2005年12月17日 - 已在美国亚马逊上发表
已确认购买
After too many years of conventional stockbroker relationships and having lost more money than I'd like to admit, it's refreshing to find the person I;ve been searching for for years. He's unconventional and anti-establishment but he's good. His concepts are firs rate and up to date and usually contradict conventional broker wisdom. This is a brilliant analyst with insight into the market that's new and refreshing he's not afraid to say what he means and has little tolerance to those that don't follow his suggestions. His win/loss percentage is incredible and if you join him and his colleagues you have to make money; that is, if you follow his guidelines and instructions. Michael is a winner and so is this book. I am now part of the Trendfund family and reading this book is one of the reason for my decision to join them. Okay, I am making money and I plan to double my portfolio within the next 12 months. This is a must read for the serious trader and all of us that are fed-up with losing money using brokers.
阅读更多
1 个人发现此评论有用

Nathan
1.0 颗星，最多 5 颗星 Absolute Waste of your good money for this book
2011年11月20日 - 已在美国亚马逊上发表
已确认购买
Just fills the pages with total useless information. It is trying to fill up pages so it can be considered a book. The cover of book is misleading. I gained nothing from this book except a headache, and I assure you prospective new readers neither will you. I caution you, do not fall for the bait by its enticing title. Total rip off.
阅读更多
1 个人发现此评论有用

Barbara C. Reyna
5.0 颗星，最多 5 颗星 Rule the Freakin Markets
2008年6月15日 - 已在美国亚马逊上发表
已确认购买
For anyone who is a novice at Trading. I recomend this book as a first read. Has lots of do's and don't's that are important to know about and lots of "How To's". But, don't stop reading, get your hands on every book you can about Trading.
阅读更多
1 个人发现此评论有用