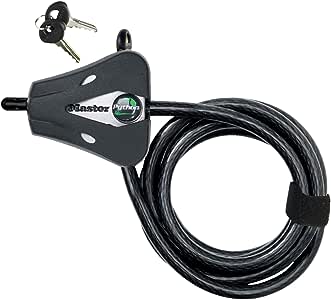 TheManWithTheMasterPlan
1.0 颗星，最多 5 颗星 Can I have my money back...
2017年6月27日 - 已在美国亚马逊上发表
颜色: 黑色已确认购买
After reasonable and moderate usage (about 10 times total), one night what I believe is the anti picking mechanism jammed. I couldn't insert the key and my bike was locked to an iron rail downtown at 3 am. I eventually had to resort to bolt cutters (they went through the cable like butter). Because of all this I'm returning the product.
阅读更多

BeccaM
4.0 颗星，最多 5 颗星 Good cinch-locking cable, just don't have excessive expectations for it
2015年12月23日 - 已在美国亚马逊上发表
颜色: 黑色已确认购买
It's not going to stop a determined thief, who will on average be carrying a bolt-cutter of some size. A basic knife won't go through this and probably neither will an average wire cutter. However I would not, for example, lock up a bike or motorcycle somewhere with just this and be gone all day. Nor would I want to try to protect something worth thousands of dollars with a mere twelve dollar lock.

However, it will likely deter the average snatch-grab opportunists. In our case, if I want to fill a can of gas for the lawn tractor back home, I don't want to be forced to make it the last stop while out on errands or have to put the filled can in the cab (which is really not safe at all), and this will let me lock the can to one of the D-rings in the bed of our pickup. We also have a metal cargo divider back there sometimes to make shopping easier--well, I want to lock that, too, so I'm not fretting about it while we're inside shopping at Home Depot or Costco. Again, it won't stop a determined, prepared thief--heck, a locked vehicle door won't even do that--but it will tend to deter the tweakers and miscreants who might think they can just grab and run.

Definite pro on this is its adjustability and the fact you can snake the cable through just about anything with a hole in it. The trouble with those double-ended loop cables is often the loop is too big to fit. As for cons, well, this cable is probably less secure than one of those larger double-loop cables, especially when they are paired with a strong padlock. But for casual use and ease of locking and unlocking, this locking cable is pretty good. The keys are somewhat on the flimsy side, and so there my suggestion is to be sure it is completely inserted in the lock before trying to turn it; if there's resistance, it probably isn't in all the way. I think another reviewer remarked about WD-40 or oil on the cable causing it to no longer be held firmly, so I'm planning to be careful about that as well.

Like I said, it's not perfect or perfectly secure, but it's way better than nothing.

Eros
5.0 颗星，最多 5 颗星 You will NOT believe this....
2018年7月16日 - 已在美国亚马逊上发表
颜色: 黑色已确认购买
The sad truth is, I bought myself a new office chair, and due to the cutthroat competitiveness in my work area, I bought this cable lock for my new chair, in case someone thinks about hiding or stealing my chair, they will now have to steal the whole cubicle as well...sad but true. This is a very sturdy lock and functionality is perfect! I literally chained my new chair to my cubicle wall with this lock. The keys are a bit small, but that is NOT a complaint, just an observation. I HIGHLY recommend this to anyone looking to secure a bike, cart, ladder, or, yes, even a chair...lol...
阅读更多
14 个人发现此评论有用

Gone kayaking
4.0 颗星，最多 5 颗星 Really liked product ... Really wanted to give 5 stars ... So close.
2016年10月28日 - 已在美国亚马逊上发表
颜色: 黑色已确认购买
So close to being 5 stars. Yes, the weak key is an issue (like most companies, they'll save 5 cents anywhere they can ... instead of spending the extra 5 cents for a stronger key, and being flooded with 5 star reviews). Just be careful ... mainly, do NOT pull cable so tight ... as this will make lock harder to open. Also, can be a "little" difficult to insert cable ... you have to turn key and hold with one hand, while inserting cable with other hand.
阅读更多
18 个人发现此评论有用

Wags
5.0 颗星，最多 5 颗星 I like that it will fit through the lock slots and ...
2017年8月1日 - 已在美国亚马逊上发表
颜色: 黑色已确认购买
I bought this to be able to lock up my new roto molded cooler. I like that it will fit through the lock slots and still have plenty of cable to spare to tie it to something solid. It is a very simple concept and seems to work well, I actually tied it up and jumped on it to see if I could get it to slide through and come apart and it did not. So I imagine that is more than most people are willing to do to steal something, and I am 280lbs so it would take a large fella and the right setup to do it. The key fits in well and turns easily, with my big hands I wish they were a little bigger but such is life. A nice little touch is the velcro strap that is attached to keep it nice and organized when not in use.
阅读更多
12 个人发现此评论有用
加入亚马逊Prime，从此免运费
亚马逊Prime会员可享海外购美/英/日/德跨境免邮，全年无限次！更有免费无限次阅读电子书服务
> 立即加入
了解我们
合作信息
帮助中心和购物指南