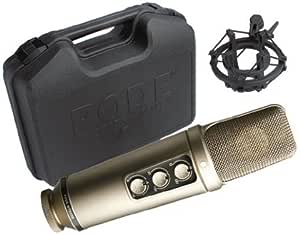 Lots of people, even reputable professional engineers, swear that there's no such thing as a single mic that's good for everything. They are, to put it simply, dead wrong. Okay, sure there are more expensive mics that specialize in one thing or another, but for the money, the RODE NT2000 is one of the best mics you can buy. It's got fully variable controls - that mean a totally variable poplar pattern, not three, not five, not even eight, but an infinitely adjustable pickup pattern. That's not all, the NT2000's also got a fully variable pad and a fully variable highpass filter. That means no matter what you put in front of it, singers, cabs, drums, horns, acoustics, chihuahuas, you name it - this bad boy's ready for it all! And the NT2000 sounds amazingly smooth - put it up against top pro studio mics and it will hold its own any day! In fact, even when you step up to higher-end gear, you're never going to get rid of your RODE NT2000.

New England Yankee
5.0 颗星，最多 5 颗星 I have two and I'm keeping them!
2008年10月9日 - 已在美国亚马逊上发表
Everyone should have a multi-pattern mic around for utility purposes and this is the one I chose after demoing a half-dozen of interest (I had particularly high hopes for the Blue Mics). Aside from one super-expensive, and unnamed mic, the Rode NT2000 was actually my favorite by quite a margin. As I regard this type of mic as a utility piece, I was looking for a mic that was fairly neutral on voice/cardioid and without too heavy a proximity effect, airy and crisp on omni, and had to have an attentuation switch.

The NT2000 has all that, plus a rugged build. I've been very pleased since purchase, having used it for voice, acoustic guitar (could probably use a warmer mic here), cab miking on electric, bagpipes, recording ambience, and percussion. I'm especially pleased with the mic's ability to capture detail in high sound pressure conditions.

The NT2000 has continuously variable patterns, not a fixed selection of patterns. It has a variable pad, not a simple cut type attentuation switch, which really helps in nailing the sound without having to compromise the mic's position. Finally, the high-pass filter is also continuously variable. All go a long way in making this a HIGHLY adaptable mic.

After my demos, I went in to buy one mic, got an offer I couldn't refuse on two, and walked away poorer but happier! You won't be able to equal that price, as it was something of a favor, but the price here is good.

Although I love NT2000's sound and capabilities, I'm not wild about the controls (pattern, etc.). These aren't knobs you grab and turn - they're thin and flat. They have an edge pattern, but I can't turn them reliably by trying to grab the edges. I have to put my thumb on the knob surface and rotate it that way. It works and the knobs won't get accidently moved, but it's not exactly the height of convenience.