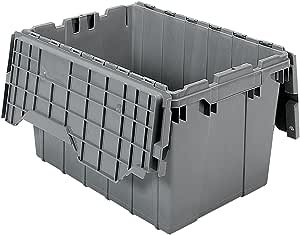 Perfect for home, office, garage and industrial use.

Prof. Kittens
3.0 颗星，最多 5 颗星 Smart product, but lax quality control?
2020年3月14日 - 已在美国亚马逊上发表
已确认购买
The product itself is as many other reviewers suggest, nice. They're sturdy, functional, smartly designed. While I don't know about the long term use and durability, they seem well constructed.

That said I wonder about the quality control. Supposedly these are new. Under this assumption I was surprised by the condition of half of the bins received.

3 out of 6 of my bins came rather dirty. There was oil, dirt, a good amount of grime on the bottoms of the bins that I had to wipe clean. The oil/grease was a thick black kind - and I don't see anything similar on the hinge so I can only imagine it's a foreign substance, not something that naturally came out of the product production process. Second, these questionable bins also had warped bottoms that are not flat like the better condition ones. It's the sort of warping that strongly implies that these bins were used, and held heavy items for quite some time. Third, there are clear scrapes and scratches along the bottom of these bins with grime permanently rubbed in that suggest they were pushed along a factory or warehouse floor with contents inside, while stacked, etc.

Assuming that these are "new" (not otherwise indicated) then it seems to be pretty negligent quality control. If they are not new, then that itself is a separate problem albeit outside the scope of the review.
阅读更多

Jakpro
5.0 颗星，最多 5 颗星 Great storage containers! Tough and well made.
2018年12月24日 - 已在美国亚马逊上发表
已确认购买
Looking at the photos, I was not sure whether these would be the cheap consumer plastic storage boxes or the commercial distribution boxes I used at my workplace. They are the strong rigid distribution commercial grade flip top storage boxes. These are really nice. These look like they will outlast me!! They are very substantial, rigid, and heavy duty.

I was also concerned reading the reviews concerning shipping damage. The ones that I received have no damage and all boxes are in perfect condition. The shipping box was pretty heavy.
阅读更多
2 个人发现此评论有用

DIY Tinkerer
4.0 颗星，最多 5 颗星 Get the good ones the first time around
2018年10月31日 - 已在美国亚马逊上发表
已确认购买
These are not the most costly bin available, but not cheap either. I am sure they will work better than the dime store variety over time and am glad I went for them eventually. One problem with the shipment I got was one bin is missing one of the hinge pins. I looked up the manufacturer website and sent them a message but they have not responded yet (2 weeks) so I will be looking for some metal rod the right diameter to fix that one. Sort of disappointed at this price point to have to repair the item right out of the box.
阅读更多
1 个人发现此评论有用
加入亚马逊Prime，从此免运费
亚马逊Prime会员可享海外购美/英/日/德跨境免邮，全年无限次！更有免费无限次阅读电子书服务
> 立即加入
了解我们
合作信息
帮助中心和购物指南