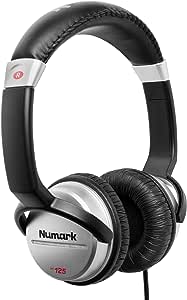 CLARITY AND COMFORT FOR THE MODERN DJ One place a DJ can't compromise, is in how they hear their mix. The Numark HF-125 headphone set delivers the goods with flexible 7-position independently adjustable dual ear cups, large 40mm Mylar speaker drivers, 6' tangle-resistant cord with 1/4" connector, and padded headband and ear cups.

Ron
4.0 颗星，最多 5 颗星 Very Good For The Money
2020年5月9日 - 已在美国亚马逊上发表
大小: Оne Расk已确认购买
If you are looking for the most posh, comfortable headphones ever, with the most outstanding sound, you may want to pass these up. But if you need a solid set of great sounding headphones, for doing studio work, or for some casual listening, I don't see how you can go wrong with these. They sound very crisp and clean, and reasonably rich, even when using no equalizer settings to assist them. But they do fall a bit short of having "upper end" headphone sound quality. But you don't expect to get that kind of sound with less than 25 dollar headphones. But the sound they do create, seems much better than I would have expected for the price I paid. And to me, they are larger than they appeared on the promotional photo, which is also good.
But they are inexpensive headphones, and as such they do have some of the drawbacks usually found in cheaper headphones.
Firstly, they wear a bit tight, and a bit hot. And no amount of adjusting I tried seemed to help. So you may want to try something else more comfortable, which probably means more expensive, for longer listening sessions. Also, I was surprised to find that they do knock out some of the outside ambient noise. But they aren't like some of the ones that cancel almost all of it out. And I wouldn't expect that from these either. But I was pleasantly surprised that there is a decent, or a measurable degree of noise cancelling with these.
And I like the "L" plug in's much better. than the straight in type plugs. But in the defense of these headphones, the cord is heavy enough, and the transition seems well designed, so this should not be an issue for years to come.
And another positive is, that the jack worked on my cellphone, right away, even with my case on it, which for me is rare, for any out of the box larger headphones. Usually I have to do some carving on the end of the rubber part of jack, to trim them down, so they jack will go through that smaller hole in my phone case, which is frustrating. But these plugged right into my phone, case and all, the first thing, with no modifications needed.
And maybe these deserve 5 stars, for the money. But I reserve 5 stars for top notch products only. And since the comfort level is a factor on these, and I don't want to seem to be misleading peopel, so 4 stars it is.

Steve Cross
4.0 颗星，最多 5 颗星 Great headphones for the $
2020年4月13日 - 已在美国亚马逊上发表
大小: Оne Расk已确认购买
I bought these to use in my home studio for music/vocal recording.I didn't want to spend mega-bucks for headphones,as I relay on studio monitor play-back for my final mixes,but I did need something to isolate the individual instruments for the recording portion(s).Found these and decided to try them due to mostly good reviews and the very cheap price.I was pleasantly surprised by the quality and sound--nice bass and overall clarity.I scored them 4 stars only because the earcups are sorta small and they tend to make my ears hurt when wearing my reading glasses with the headphones for more than about 45 minutes.Larger/softer earcups would be helpful,but for 13 bucks,they work well enough that I'll keep using them.
阅读更多
2 个人发现此评论有用

Lively Ventures
5.0 颗星，最多 5 颗星 Value.
2019年12月23日 - 已在美国亚马逊上发表
大小: Оne Расk已确认购买
Great for the price.. My young aspiring producer/dj uses them more often than the expensive Dolby surround gaming headset he wanted so bad... He goes through a couple sets a year at least, no matter how much they cost. I'd rather it be these till he is ready for the professional ones. Hopefully by then he can earn his own money for them. Music equipment is expensive with seemingly no ceiling so I appreciate the value.. Haha.
阅读更多
3 个人发现此评论有用

Brandon Wright
4.0 颗星，最多 5 颗星 Solid Simple Headphones.
2020年6月14日 - 已在美国亚马逊上发表
大小: Оne Расk已确认购买
No frills. Straight to the point simple headphones. They don't get terribly loud, or pump out much bass, but possess pretty good sound quality overall. At this price point, you really can't beat them. Especially for a reputable brand like Numark. Even though they are relatively inexpensive, they don't feel cheap, or put out a low quality sound. I've put mine through the ringer (I'm pretty rough on headphones), and they have held up amazingly well. Very happy with these simple Numark headphones.
阅读更多
2 个人发现此评论有用

These headphones were everything they appeared to be. Cheap, with okay sound and decent comfort. They lived up to expectation for the most part, but didn't take much of a tug to break them. (To be fair, my kids are rough and maybe this wasn't the set for her.) Oh, and the part that broke was the arm holding the speakers (the thinnest part) on both sides.

Overall, they weren't surprising. I'd probably buy them again if I were getting them for myself and wanted something cheap. Just don't let the kids get a hold of them and they'll probably last some time. The speakers and pads were still in good condition.
阅读更多
1 个人发现此评论有用
加入亚马逊Prime，从此免运费
亚马逊Prime会员可享海外购美/英/日/德跨境免邮，全年无限次！更有免费无限次阅读电子书服务
> 立即加入
了解我们
合作信息
帮助中心和购物指南